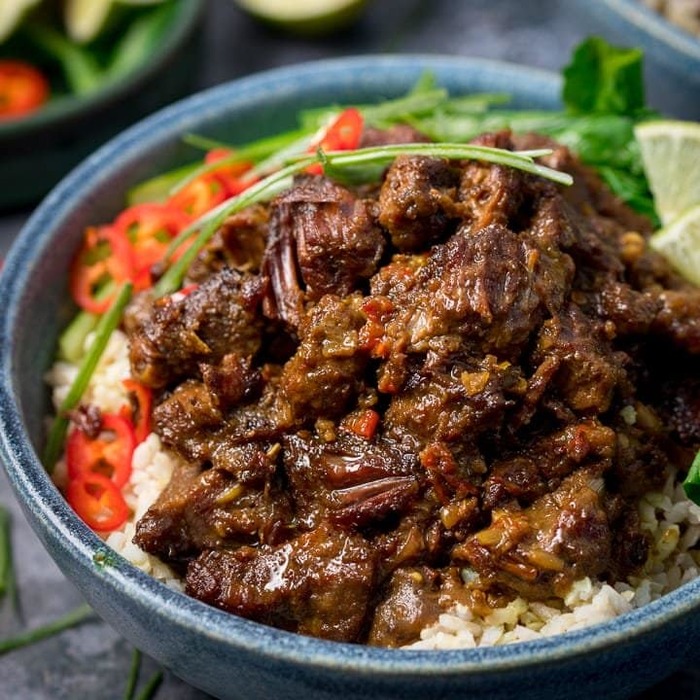 This is one of my “cheat” curries! Beef Rendang is a Malaysian curry and is considered by many to be the king of all curries! To say it’s extravagantly delicious is an understatement. There are very few curries in this world with such amazingly complex flavours.

Originally from Indonesia, the sauce is made with aromatic spices like cinnamon, cardamom and star anise as well as fresh aromatics including lemongrass, garlic, ginger and galangal.

Unlike many curries, Beef Rendang is a dry curry which means there is not loads of sauce. However, the meat is so ridiculously tender and has a thick coating of sauce on each piece, so the meat literally falls apart at a touch

It’s straight forward to make especially as with this recipe, the paste is expertly made for you. I have tried a number of Rendang pastes and also make the paste from scratch – this is easily the best way that I have found to make this amazing curry which, whilst very tasty, isn’t too chilli hot!

This dish, like many curries, should be cooked over two days

Day before - basically following the recipe instructions from the packet

Sounds different - at a very good Malaysian restaurant in Wellington, they served the Rendang with steamed cauliflower and broccoli florets. I really like this touch but some don't! Chef's call!!

Serves 8 – this freezes well but if you want a smaller meal, simply halve the ingredients and use one packet of the Prima Taste Rendang